If you've been reading my blog for a few years, you may remember when I played Munchkin with my kids in 2008:

I'm going to speak in geek to people who have played Munchkin: Neither of the kids would help me, and I kept getting the Truly Obnoxious Curse, so I was having a hard time gaining levels. As a result, I was stuck at level 3 forever while they were sitting around level 7. I decided that my goal in the game would be to mess with them as much as possible, and forget trying to gain levels on my own.

Nolan was to my right. He kicked in a door and didn't find a monster, so he looked for trouble, playing a level 3 something from his hand. "Does anyone want to mess with me?" He asked, avoiding looking in my direction.

"It's funny you should ask," I said. "That's an illusion. You're actually fighting a level 18 Squidzilla." I played the appropriate cards.

"Man, that's a really great move," I said. "Too bad I'm playing Annihilation on it."

He was forced to discard the potion, and face the Enraged Squidzilla on his own.

You may also remember the 3872 Intelligent Humongous Orcs Incident of 2006, which caused much laughter and rejoicing.

Munchkin is a polarizing game. People who love it are crazy about it, and people who hate it want to kill it with fire. I fall into the middle; it can be a really fun game if the players get into the spirit of the puns and the backstabbing and don't succumb to the crabs-in-a-barrel mentality that can keep a player at level 9 an hour after the game stopped being fun.

On the most recent Tabletop, Sandeep Parikh, Felicia Day, and the game's creator Steve Jackson played Munchkin with me, and I think we illustrated exactly why this game can be so much fun:

If you can't see the embedded player above, or you want to watch us play in glorious HIGH DEFINITION, here's some linky magic that will give you what you're looking for.

Munchkin is one of those games that brings out the Rules Lawyers and self-proclaimed experts who spend a lot of time pointing out every time we did something that wasn't optimal, or when we screwed up with the rules, so this is a very good time for me to point something out: The goal of TableTop is to show how much fun it is to play games. It isn't a tutorial on how to win them. We know that we make mistakes (we shot 20 episodes in 10 days on a tiny budget with 60 different players) and we're okay with that.

I worked on [REDACTED] today, and had more fun than I thought possible. I can't say anything more until July.

Tomorrow, I work on [REDACTED], which is different from [REDACTED], but should be really awesome, too. I can't believe I get to spend two days working with [ACTORS].

(It was a lot easier to talk about my job before the studios became obsessed with secrecy.)

So a couple of quick things before I get back to preparing for [REDACTED]:

Finally, my beloved Los Angeles Kings are in the Stanley Cup Finals for the first time since 1993. This is what I looked like last night after they won in overtime:

Not actually taken last night, but I do this whenever the Kings win. 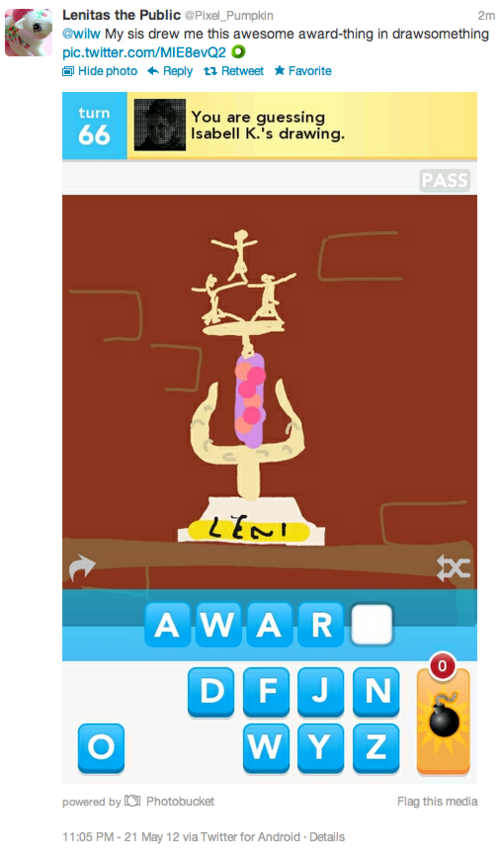 I keep hearing from gameshops that people are coming in and buying the games we play on Tabletop, and from people who tell me that they're using Tabletop to show their non-gaming partners why we love to geek out over games all the time… but someone choosing to use our super lame totally awesome trophy that Lindsey got from eBay for 3 bucks we spent an unfathomable amount of money on making as the trophy for "award"? That's amazing.

I do not always make a meme reference to my own show, but when I do, I choose this one.

Here's some stuff we cut out of last week's episode of Tabletop, featuring a looooooong intro by me, for your amusement.

(Please enjoy how much people complain in the YouTube comments because my intro is longer than the outtakes I'm introducing. Awesome.)

In my gaming group, I am not the guy who is good at explaining rules (that guy would be Tom D., when he plays with us, or my friend Cal M., the rest of the time) so the part of Tabletop I was the most anxious about is that segment at the beginning of the show where I explain the rules of the game.

It's a real challenge, probably more difficult than you'd expect, and thanks to clever editing and postproduction work, looks much easier and flawless than it actually is.

In preparation for each episode, my friend and associate producer Boyan and I would sit down at my dining room table and talk through the rules. The first thing we'd do is figure out what kind of game we were playing (bluffing, communication, resource-management, etc.) and build out from there. I would set up the game in front of me, just like you see on the show, and I'd "teach" the game to Boyan. If something worked, one of us would write it down on a bullet-pointed list. That list went with me to work the next day, and I used it to remember what the audience needed to hear.

I'm cleaning up my office today, and I just came across two pages I wrote for last week's 3 Quick Games episode. I thought they may be interesting to some of you, so here they are:

You can see that I was considering a running "like you do" joke. It didn't work, so I dropped it when we filmed. 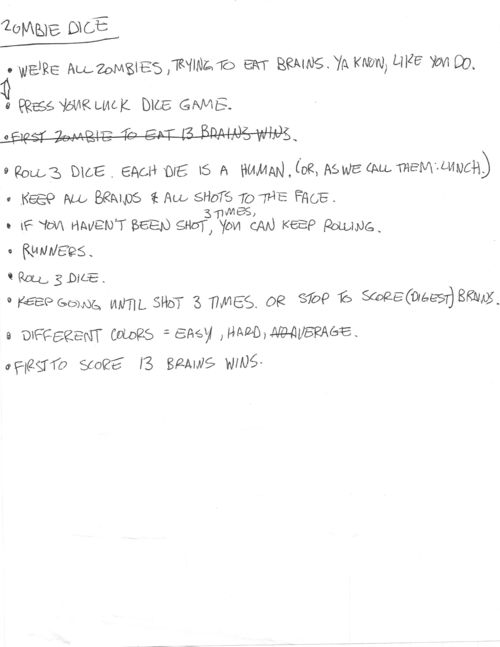 Alternate way to win the game: Be Ryan Higa.

So, 9 days before I turn 50, here are a couple things I have figured out that help me not suck too much.

I wrote a story for the 400th issue of the Star Trek comic!