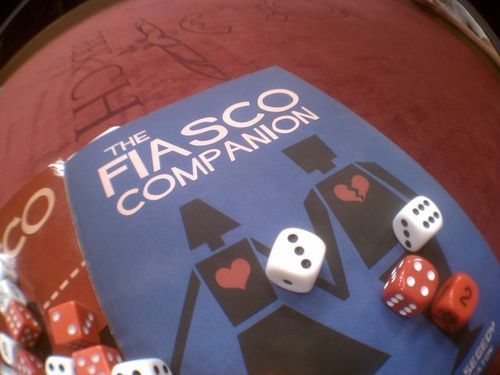 One of the best times I had this season on Tabletop was playing Fiasco with John Rogers, Alison Haislip, and Bonnie Burton.

I won't spoil anything, but I will tell you that Will Hindmarch, Jason Morningstar, and I teamed up to write an original playset for the show, and we'll be releasing it when the episode airs.

This is a picture I took of my Fiasco Companion, sitting on our Emissary table from Geek Chic, the day we filmed the Fiasco episode. I was fooling around with this cool little fisheye lens my friend gave me to stick onto my cellphone, and this was one of the few pictures that turned out fairly well.

25 thoughts on “A picture from Tabletop”

This is from my Tumblr Thingy. I thought it would be relevant to some of your interests. QUESTION: Hello, I have a question about Tabletop (don’t worry, it’s not “when […]

My upcoming eSports competition show, Gamemaster, has been delayed like everything else, but the people involved wanted to use the resources they had already mustered for production to do some […]

My friend, Will Hindmarch, is a brilliant writer and game designer. He’s one of the smartest people I know, and his weekly newsletter always challenges and inspires me. In this […]

Red Dead Redemption 2 is the most emotionally profound game I have ever played. When I finished it a couple months ago, I felt a kind of wonderful sadness that […]

So, 9 days before I turn 50, here are a couple things I have figured out that help me not suck too much.

I wrote a story for the 400th issue of the Star Trek comic!